Life and Laughter After Cancer


A story that I want to share..... because we are all women and you never now
about life can changing so fast ....
Please read and thank you to Vogue and TODAY Show to share this Story of Tig Notaro with me ....
a good new positive story and person!
Just few words from me because I am not good with words ... but soon I will write something. 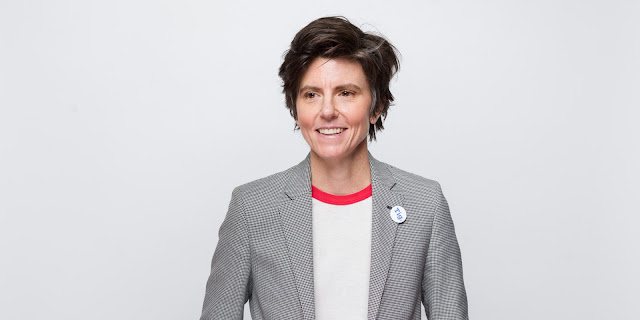 I have a distinct memory of the first time I ever heard the comedian Tig Notaro’s voice. It was a Friday afternoon in the early summer of 2012. My boyfriend had just picked me up at The New York Times, where I was working, and we were driving out of the city for the weekend, NPR humming along in the background. I wasn’t paying much attention until this funny, flat, sort of stricken-sounding person came on the radio, telling a completely mundane, very slow-paced story about the experience of repeatedly running into the eighties pop star Taylor Dayne around Los Angeles. “I love your voice,” the storyteller told Dayne at every opportunity, and then, in the retelling, she would pause for what felt like an impossible amount of time, letting the line sink in, the laughter build. It was hilarious, but the kind of funny you can’t really put your finger on. It was totally original and impossible to tune out.
I had no idea when I listened to that segment that the voice belonged to a comedian named Tig Notaro, or who Tig Notaro was. And I definitely had no idea that this mysterious person with the mysterious name was already in the middle of a really, really bad year.
In fact, the Taylor Dayne segment, as we see in the intimate new documentary,Tig, out on Netflix today, happened when Notaro was already more than halfway through the laundry list of calamities that befell her in 2012. First, while filming a small role in the movie In a World, Notaro collapsed and ended up hospitalized for a week with a life-threatening C. diff infection. Shortly after getting out of the hospital, still unable to eat and twenty pounds lighter, she received the horrifying news that her mother—“the person who understood me most”—had fallen, hit her head, and lost consciousness, never to wake up again. She traveled to Texas to be with her mom as she was taken off life support. Then she went to New York, to tell the Taylor Dayne story during a live This American Life show, which was taped in early May and aired on May 18. “I needed something good to happen,” Tig explains in the documentary. “I felt like if I could just get to New York and doThis American Life, I would feel like I was coming through something.”
It was while she was in New York that TAL’s Ira Glass suggested Notaro do a piece about the shitty year she was having, but she wasn’t ready to go there. She went back to L.A., where, by late summer, she had found a lump in one breast, which turned out to be lumps in both breasts, and a diagnosis of bilateral breast cancer. She was facing a double mastectomy and a very uncertain future when she decided, just days after her diagnosis, to take to the stage at the L.A. comedy club Largo with some new material. “That was a risk,” she tells the camera. “It could have been my last show ever that bombed, and then I died.”
She neither bombed nor died. What she performed that night—a 30-minute, off-the-cuff, stream-of-consciousness set in which she processes her shock, fear, and bewilderment in real time on stage—became comedy legend, single-handedly elevating her from comedian’s comedian to near-household name. Notaro became a viral sensation before there was anything even available for the Internet to hear. (Louis C.K. tweeted about her “masterful” set, and eventually made a recording of it available on his website.) Press coverage and book offers started rolling in. “I was thinking, Am I even going to be alive to finish a book?” Tig remembers.
For fans of that material (aka pretty much anyone who’s ever heard it), it’s tempting to watch the hour-and-a-half-long Tig as a sort of extended Behind the Music about the famous Largo set. But the documentary, directed by Kristina Goolsby and Ashley York, actually focuses on the year that followed that night, when Notaro, suddenly famous for a one-off comedy set that could never be repeated, found herself in serious demand but without any usable material. It’s about the process of trying to develop a new act, painful night after night, at small clubs across the country, where promoters announced her with great fanfare and Notaro knew she couldn’t deliver. It’s also about rebuilding her personal life (2012 involved a breakup, which she mentions in her set, but the documentary doesn’t delve into). We watch Tig fall in love with the actress Stephanie Allynne, to whom she’s  now engaged. We also watch the heartbreaking process of Tig trying to have a child. Notaro, the documentary reveals, was already trying to get pregnant before she got sick; in the aftermath of cancer, no longer able to carry a baby herself, she endures risky hormone treatments to freeze her eggs. Her friend donates sperm, and, after she announces her need for a surrogate on her podcast,Professor Blastoff, a Seattle woman volunteers. We’re right there with the grieving comedian, as she attempts to implant the fertilized embryos, her last shot at having a biological child.
It’s an emotional and moving portrait of life after cancer, and of the sort of equanimity that can come out of tragedy. Tig is famous for finding humor in dark places, for chronicling her misfortune, but her best quality, as this documentary demonstrates, is her willingness to count her blessings. “After this crazy year that I had, one of the really positive things that came from it is being more open to people than I’ve ever been,” she tells her surrogate, hoping for the best. “People have shown just such generosity and love and kindness that my head is exploding. This is not something that I would have done a year ago. I was just so much more closed off.”


Posted by Angeles Almuna
Email ThisBlogThis!Share to TwitterShare to FacebookShare to Pinterest